Solution to Puzzle #200: Achieve Your GOAL

Friends, this is a bittersweet moment for me. This is the last post for some time, until I decide to pick up the threads again. Thanks to all of you for making this a wonderful journey for the last 5 years.

This was a simple puzzle and many of you sent me correct answers. Here are the first 5 to respond, each of whom have been sent an Amazon gift coupon.

I am copying the answer from one of the respondents. Thanks again to my daughter, Arushi Sharma Goyal, for contributing this puzzle. 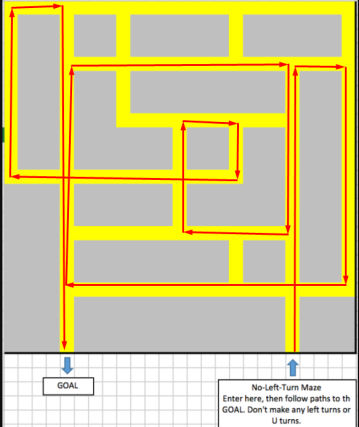 This puzzle was originally posted in April 1969 by Martin Gardner, and is a classic even today. Thanks for an overwhelming response to the puzzle and my apologies for the delayed post as I was traveling on work outside the country over the last two weeks.

Many people sent correct answers – this includes Suman Saraf, Kumz91 (sorry do not know the full name), Naresh Kumra, Mohit Rana, Delhi Scrabble (again, do not know the real name), Gaurav Sharma, Viv423 (do not know the name again), Rishikant, G, Rowan an Pratik Poddar. And sorry, if I have missed out anyone. Well done all.

Its been nearly 5 years since I started posting puzzles, and today is the 200th puzzle. I have thoroughly enjoyed posting puzzles, hearing from so many of you, especially some amazing children over the years. But its time for a break now – not sure if this is a few weeks or longer. So, enjoy the last puzzle – first 5 correct answers get a gift from my side!

This puzzle was given to be last week by my younger daughter, who got this in her class (grade V) in a math quiz. Its a simple puzzle, where you need to find your way from the entry to the GOAL without taking any left turn. 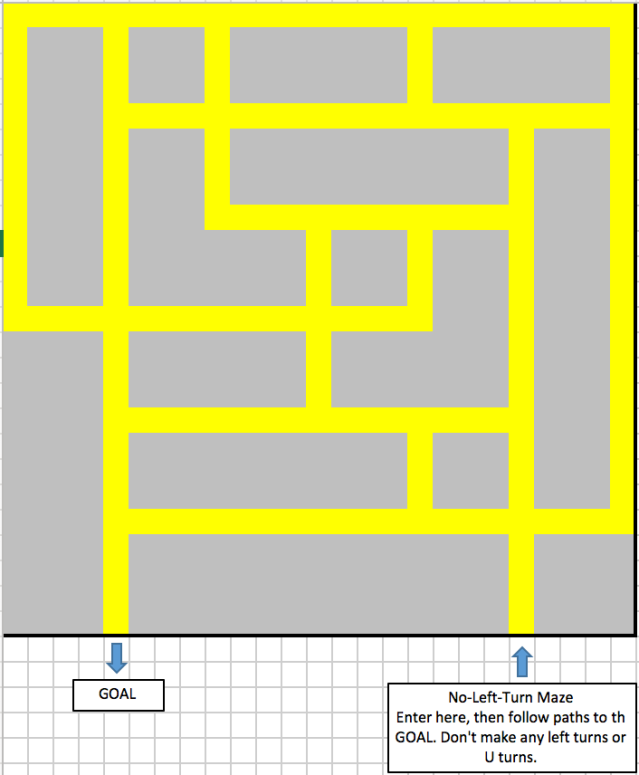 This was a difficult puzzle, even though it was seemingly simple. I did get attempts from a few people, but the only correct answer came from Gaurav S (founder of d8i.ai) – thanks and well done Gaurav!

The site from where I took this puzzle had many  correct answers, most of these were largely a bit of trial and error. One solution, which I modified a little, is as follows:

For each of the output node, if the desired input for firing is X, Y, Z (each of these being either a 0 or a 1), design the weights as:

When you do this, you get an input output matrix as follows:

If we keep the threshold to be just below the thresholds mentioned in the table, you will get the desires output.

Hope you all enjoyed the solution!

Every time you pick up a Martin Gardner book, there is still always a wonderful puzzle that one has not seen. This one is an original Martin Gardner puzzle, i.e. this is his own creation, published in the book The Colossal Book of Short Puzzles and Problems.

Please look at the figure above. This is a desk calendar made out of two cubes that Martin Gardner saw at the Grand Central station in New York in a shop. Each day from 01-31 can be indicated by the two cubes so that their front faces give the required date. Each face can have a unique digit from 0 through 9. What are the four digits that cannot be seen on the left cube and the three that cannot be seen on the right cube?

This was a relatively simple puzzle, and I got correct answers from Suman Saraf, Mohit Khare, Vishal Poddar and Pratik Poddar – thank you all!

An easy way to think about this is to create a 10 digit binary number, where each digit represents one of the friends each. 0 means the friend is not coming, and 1 means that the friend is coming. Note that there can be 2^10 combinations here, and each of them represents a distinct combination of friends coming.

Thanks to my INSEAD friend Sergio Werner for pointing me to a new source of puzzles and science articles – http://www.quantamagazine.org. I am reproducing a puzzle posted there by Pradeep Mutalik.

Neural networks and deep learning are the buzzwords of the day. Here is a puzzle that shows the basic mechanics of a neural network.

We’re going to create a simple network that converts binary numbers to decimal numbers. Imagine a network with just two layers — an input layer consisting of three units and an output layer with seven units. Each unit in the first layer connects to each unit in the second, as shown in the figure below.

As you can see, there are 21 connections. Every unit in the input layer, at a given point in time, is either off or on, having a value of 0 or 1. Every connection from the input layer to the output layer has an associated weight that, in artificial neural networks, is a real number between 0 and 1. Just to be contrary, and to make the network a touch more similar to an actual neural network, let us allow the weight to be a real number between –1 and 1 (the negative sign signifying an inhibitory neuron). The product of the input’s value and the connection’s weight is conveyed to an output unit as shown below. The output unit adds up all the numbers it gets from its connections to obtain a single number, as shown in the figure below using arbitrary input values and connection weights for a single output unit. Based on this number, the output number decides what its state is going to be. If it is more than a certain threshold, the unit’s value becomes 1, and if not, then its value becomes 0. We can call a unit that has a value of 1 a “firing” or “activated” unit and a unit with a value of 0 a “quiescent” unit.

Now the question: Is it possible to adjust the connection weights and the thresholds of the seven output units such that every binary number input results in the firing of only one appropriate output unit, with all the others being quiescent? The position of the activated output unit should reflect the binary input value. Thus, if the original input is 001, the leftmost output unit (or bottommost when viewed on a phone, as shown in the top figure) alone should fire, whereas if the original input is 101, the output unit that is fifth from the left (or from the bottom on a phone) alone should fire, and so on.

If you think the above result is not possible, try to adjust the weights to get as close as you can. Can you think of a simple adjustment, using additional connections but not additional units, that can improve your answer?

Happy neuron-firing over the weekend!

Solution to Puzzle #196: Bugs on a Board

Apologies for not posting anything in the last few weeks, was traveling on work or vacation through this period.

This was not a very difficult puzzle, but I got correct answers only from the two people who solve every puzzle – Pratik Poddar and Suman Saraf – thank you and well done!

(b) Bugs can change places pairwise. One can leave only the bug in the centre square or the corner, which will be the only empty square.

This is a very common puzzle, many variants of which one would have. I still like it as the answer is very elegant, and teaches children a methodology. This one is from Mathematical Circles (Russian Experience) by Dmitri Fomin, Sergey Genkin and Ilia Itenberg.

A person has 10 friends. Over several days he invites some of them to a dinner party so that the company never repeats itself i.e. the exactly the same set of people cannot repeat itself on any of the days. He may, however, not invite anyone on one of the days. For how many days can he continue to invite people without repetition?

Happy partying…and there will be a lot of it!

I received many correct answers. These included  Suman Saraf, Vishal Poddar and Anand Sanghi. Thank you and well done!

This puzzle can be solved using the concept of “invariants” and parity.